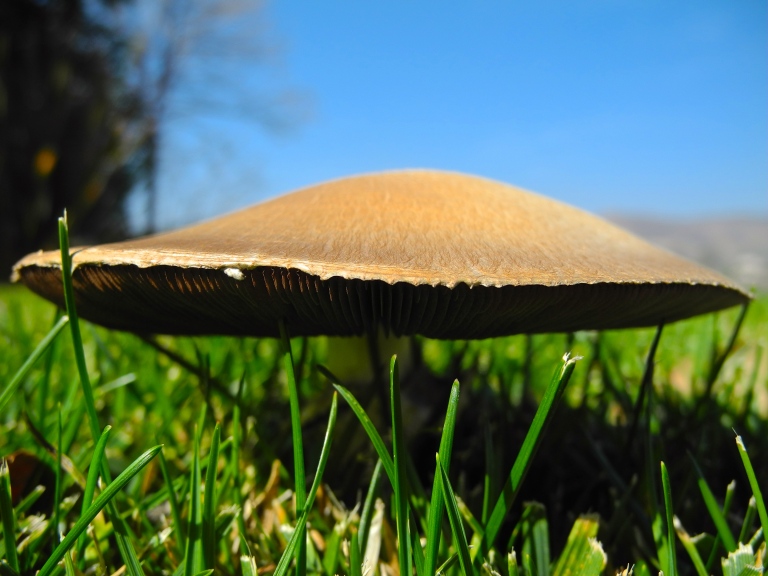 The children were the first to discover it.

The country boys who lived near the creek had skipped school again as they were wont to do. Instead of trying to figure out problems on chalkboards or books, they spent their days running through the woods, shooting at rabbits with their pellet guns, and sharing cigarettes without inhaling much. At the edge of the woods was a clearing and it was at this point that they always went slow. They were always careful before coming into the sunlight, because sometimes the sheriff took his lunch break on a sunny rock in the meadow, and they did not want to be reported, dragged back to school, or worse, back home. Tommy, the fastest runner, was the first to arrive and he stopped just shy of the edge of the shadows and looked out into the clearing.

Tommy whistled a low, long whistle that made all the boys stop and look as well. “What the heck is that?” Tommy said to the others. “Shush” said the oldest, Billy, who angrily waved the other boys further back into the shadows. “That’s some kind of science thing – maybe something even atomic,” said Billy, “and we’d better stay away from it.”

“Aw shucks, Billy, you never know how to have fun, said Andy. “Must be you’re too old now, always liking girls and everything”. “Yeah!” the other boys agreed, even Tommy, who had been the first to see the giant foreign thing in the center of the clearing, and who was, deep down, afraid of this thing whatever it was.

But curiosity is a powerful force, and the boys could not resist its pull. They watched the saucer-shaped brown object for a while, looking for clues as to what it might be. But when they could discern neither movement nor door, nor anyone around it, the boys slowly moved in closer. They crept low through the grass, still trying to stay in cover. But when they got about twenty feet away from it, their courage suddenly evaporated. They couldn’t do this on their own. They needed the girls.

So back they ran, this gang of hardy boys. Back through the woods to the creek where another gang of school skipping kids hung out. They found the tough girls, all tomboys, led by tall lanky Sarah who wasn’t afraid of anything. Excitedly the boys tried to tell Sarah and her gang of girls what they’d seen in the clearing, but it didn’t make sense. “You boys are just making gibberish,” Sarah said impatiently. “Like always! You’ll have to show me.”

Together then, the boys and girls who preferred to spend their days free and roaming the woods, went back to see just what to make of the giant who’d suddenly appeared in their woods. When they got close to the clearing Billy took the lead once again and motioned for all to be quiet and stay low. Sarah and her gang hushed and crouched in the tall grass. They looked with wonder at the giant brown saucer. They were filled with excitement but they too had no answer as to what it was.

Sarah, however, had an interesting and practical suggestion. “Well, we sure can’t tell what it is until we observe it for a long while – both in the day, and in the night. So I think we’d better camp here tonight and keep watch to see what happens. Maybe this thing changes into something in the moonlight or something. That’s what I think. You all with me?” Sarah put her hands on her hips and looked around. She dared anyone to disagree with her, and like usual, no one did.

So the kids settled in for a long night in the woods. During the night the dew fell thick and cold. The children tried to stay awake to keep watch, but one by one they grew too tired and too cold, and snuck back home to their warm beds. And when the dawn came, not one child was left in the woods at the edge of the clearing. They did not return that day, nor the day after, for their parents had punished them for cutting school and staying out past their dinner time.

It was three days later. The only children allowed the freedom to return were Sarah and Billy. They set out together, eager to return to the clearing. Before stepping out of the shadows they searched the open space to see what might be revealed, but the giant brown mysterious object was utterly and completely gone! They gasped, incredulous that their questions would not be answered. They ventured close to the spot where they’d last seen the object and all that remained was some upturned earth and a clump of disturbed grass.

It certainly sounds like the name of an alien race, does it not?

2 Replies to “Day of the Giant Mushroom”